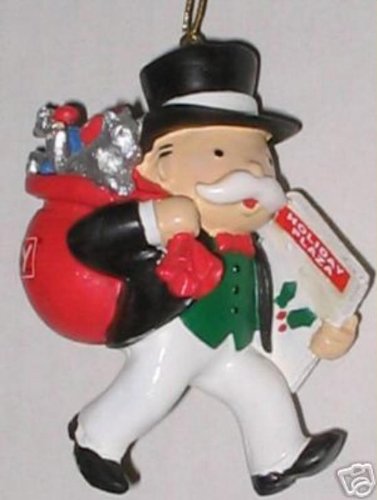 Monopoly is a well known and loved board game that was originally produced in the 1930s. Christmas Day when I was growing up meant playing board games and generally spending time as a family (there was a no television rule on Christmas Day in our house). One of my favorite games to play was Monopoly.

It’s hardly surprising that I would love to have some Monopoly Christmas ornaments to hang on my tree then is it? My daughter also loves the game of Monopoly so I think she’d love these Monopoly Christmas ornaments as much as me. In fact we have a regular ‘Monopoly Day’ during school holidays where we set up the board and play all day – breaking for lunch and snacks – I’m not sure how many years we’ll keep going as she’s starting to want to spend more time with friends, but I don’t mind as she beat me last time!!

Sometimes Mr Monopoly gets bored with gracing the game of monopoly box so he hops off……especially at Christmas time. You see, what many people don’t know is that Mr Monopoly absolutely loves the smell of pine needles so making a Mr Monopoly Christmas ornament was bound to happen.

In this Christmas ornament the game of Monopoly is forever linked to Christmas as it’s made to adorn family trees wherever you’re celebrating the holiday season. 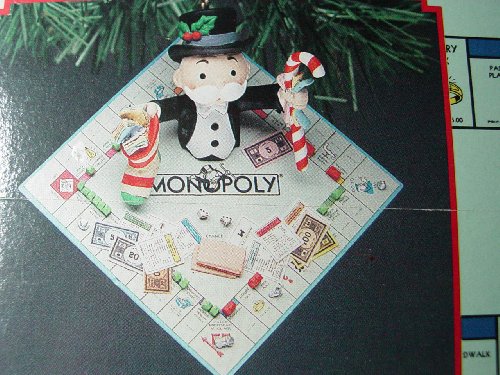 I’m sure I’m not alone in having memories of playing Monopoly at Christmastime, so why not make the connection ‘oficial’ with one of these cool ornaments? 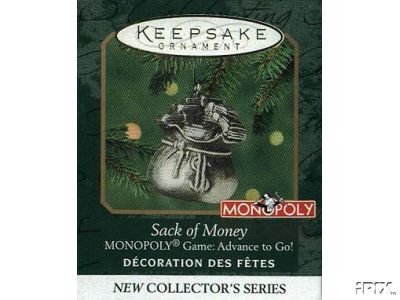 In 1999 Monopoly fans voted for the sack of money to become the new Monopoly game token.

Celebrate the sack of money with this Monopoly Christmas ornament hanging on your tree.

Is the racing car your favorite Monopoly piece?

Mr Monopoly certainly seems at home in it and this is another fantastic Monopoly ornament for your Christmas tree.

If you’d rather you can also get the racing car piece on it’s own without Mr Monopoly driving it. Personally I think that’s the one I’d prefer because I often have to be the racing car as I usually miss out on having the dog since I’ve become a mother!

Everyone Aboard the Monopoly Express – Monopoly Train Christmas Ornaments

Long before we had the movie The Polar Express trains and Christmas trees seemed to be linked which is why it should hardly surprise you that you can get train inspired Monopoly Christmas ornaments and you’ll never guess who the train driver is ……. why it’s Mr Monopoly himself!