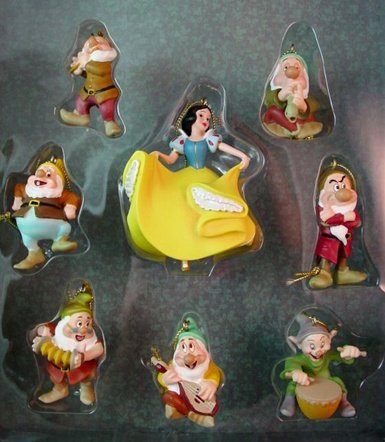 Last year’s Disney movie Frozen still has lots of fans who are keen to decorate their trees in ‘Frozen fashion’.   These Disney Frozen Christmas ornaments allow you to do that in style.

Now I’ll admit my favorite character has to be Olaf and I would happily decorate a tree with just Olaf ornaments (but then I love snowmen ornaments in general so….), however for those of you who love other characters you might like to start your decorating off with a set of Frozen Christmas ornaments like the ones featured below.

I think that buying sets is a great way of adding just a few of the themed ornaments you want to a tree, you can then add other ornaments such as snowflakes, icicles or just complimentary colored baubles to them for a lovely tree. Alternatively you could add a few more like I’ve provided below.

With such a happy looking face I think Olaf may become (if he’s not already) everyone’s favorite snowman – Frosty might have a battle on his hands! You can get some fun Olaf Christmas ornaments here and add them to a Frozen themed tree or just a battle tree between Olaf on one side and Frosty on the other!

I might just add a few Olaf ornaments to my other snowman ornaments and have a snow themed tree.

Here are a few more ornaments for your holiday decorating….. 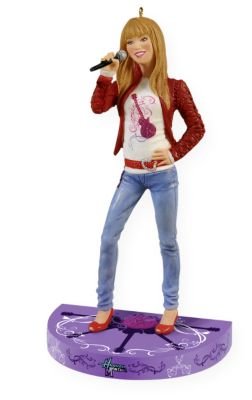 A great idea is to get have Christmas ornaments that are very special, for example what your child loves that particular year. This year having a tween-age daughter Hannah Montana rules! By buying a Hannah Montana Christmas Ornament for our tree I’ll make her Christmas this year. In future years to come we can look at it and say things like – “…do you remember when you wanted to be Hannah Montana…” Let’s face it Christmas is all about sharing family memories

I wish I’d thought of this idea earlier as we’d have Wiggles ornaments, Dora the Explorer decorations and Bratz ornaments already on our tree!

Out of all of the Hannah Montana ornaments available I must admit I like this featured one, hardly a surprise to learn that it’s by Hallmark as they bring out great Christmas ornaments every year!

Hannah Montana not only sings, she also knows how to play the guitar which could’ve been another reason for my daughter loving her as she also plays guitar.   To be honest though I think it was all about the idea of being a secret pop star that sold her on Hannah!

The great thing about these ornaments is that you can also let your daughter use them as room decor in her bedroom when they’re not on the tree. Once she grows out of Hannah simply wrap them up safely with the other Christmas ornaments and just bring them out once a year accompanied by choruses of ‘oh mom, not the Hannah ornaments they’re so lame….’ etc. As they continue to get older the choruses will change to things like ‘oh do you remember when I absolutely loved Hannah?’ etc.

Check out a few more Hannah Montana Christmas ornaments that would be perfect for lighting up the face of any little Hannah fan.

To complete a Hannah Montana tree you could add microphone ornaments, acoustic guitar ornaments, star Christmas ornaments and butterfly ornaments. Mainly, though choose one of her color schemes (preferably your daughter’s favorite one) and stick with that on the tree. If you just want to add to your family tree then just one or two of the ornaments featured here would be perfect.

If you have a tween aged girl in your life then the chances are you have heard of Hannah Montana and what better way to bring a smile to that girls face than with her very own Hannah Montana Christmas Ornament to hang on the tree.   It also has the added benefit of embarressing her in a few years time (parental payback – it’s great!).

There are a number of different Hannah Montana Christmas ornaments to choose from at the link above, but I thought I’d let you know my daughter’s favorite one and link to it here –

Disney Christmas ornaments have become quite a collectible type of ornament over the years and many people cover their Christmas trees with the magic of Disney.

There’s something magical about including Mickey and Minnie Mouse on your Christmas tree or one of the beautiful Disney Princesses, even Tinkerbell makes a gorgeous Christmas fairy.

If you have children in the house they may love some of the newer Disney stars like Phineas and Ferb or Hannah Montana, if you’re thinking of your childhood then you might be thinking of Goofy or Bambi or even Pinochio.   One things for sure by adding a Disney ornament on your Christmas tree you’re adding a touch of nostalgia and here’s a couple for you to enjoy now –

/p>
Note: The author may receive a commission from purchases made using links found in this article – more information can be found on our disclosure page.